About those twins. Making our parameters patient centered.

IVF has a well known “unintended side effect”, the risk of twin pregnancies. It has been shown again and again that transferring two embryos (DET) yield higher pregnancy rates than transferring one embryo (SET), but it also leads to more twin pregnancies. And while it seems that cumulative rates makes up most of the gap, many clinics don’t have access to easily see and report those rates (more about that in a later post).

The parameter that we commonly use in IVF to report on twins is the twin rate, essentially which proportion of the deliveries that are twins. Some countries, such as the UK, have set standards for what their twin rates should be, while others have guidelines and laws regulating which patients are allowed to have DET and when SET have to be performed. And it works, as shown in the January 2015 issue of Focus on Reproduction (page 13), Dutch clinics were able to lower the twin rate from 10% to 5% by implementing a strict policy on SET. So twin rates are a good measure for clinics and countries to look at in order to improve; however, there is one major drawback.

Twin rate is NOT a patient centered parameter.

Twin rates tell us something about how a clinic or country is doing overall, and we know how to bring it down. Do more SET! But it does not answer the question the patient who is outside the guidelines and policies of SET might ask:

“What is my risk of having twins if I have two embryos transferred?”

For her, it does not really matter that 7,5% of deliveries from your clinic are twins, because ultimately the twin rate as a parameter is very influenced by how many SETs you do and how well those perform. If your clinic does 80% SET, and on those that are most likely to become pregnant, then those are the ones that will contribute the most to the twin rate. Most births from SET will be singleton births, thus increasing the denominator of the twin rate calculation.

The first solution to make this more patient centered and answer our patient’s question is to look at the twin rate only for DET. Simply removing all SET from the equation, since they do not apply in this particular case.

The second solution, and my preferred method, is to answer the question. Use the parameter I call “Twins per DET”, simply dividing the number of twins by the number of double embryo transfers.

There are several reasons why this is a good parameter to use:

Many of these points become powerful when you have access to your raw data for analysis. If the national policy is SET in women younger than 38 with their first or second attempt, then this parameter can be used to compare groups that fall outside that window in order to see where it might be wise to also do SET. For instance younger than 35 but more than two attempts, 35-37 with more than two attempts, 38-40 with first or second attempt, etc.

Further, it can be coupled with the quality of the  embryos you transfer. What, if any, is the difference between transferring two top quality embryos (TQE) compared with two medium quality embryos, or one TQE and one poor embryo? This is particularly relevant now that time-lapse is being more widely used with the hope of being able to better select viable embryos.

For sake of argument, let us imagine that current scoring methods are able to predict the actual viability of an embryo to be 50%. If you transfer two of these embryos, then both embryos will be viable 25% of the time (0,5 * 0,5) and you will have a twin pregnancy provided that the endometrium is receptive. Consider then a new scoring method that increases this from 50% to 60%. What happens then is that both embryos will be viable 36% of the time. If we assume that the endometrium is viable 60% of the time, then our Twin/DET would increase from 15% to 21,6%. A 20% relative increase in scoring predictability (60% / 50%) turns into a 44% relative increase in twins per DET!  (21,6% / 15%)!

And this is where using twin rates can give us “false” information. For sake of argument, let us say that under the old scoring regime the clinic did 70% SET, but the confidence gained from the new system increases that to 80% SET. For the old system, our twin rate would be 25% of the births from DET * 30% of transfers being DET, which equals a twin rate of 7,5%. (Again, this is simplified a lot for the sake of modeling but is based on my poster at ASRM 2013, A model to calculate embryo viability and female receptivity). Under the new system, we get 36% * 20% which is 7,2%. So as a clinic we are doing better, we are making less twins than before, our twin rate went from 7,5% to 7,2% and things are going well.

Except for our patients that do get DET, which now have a much higher risk of getting twins! 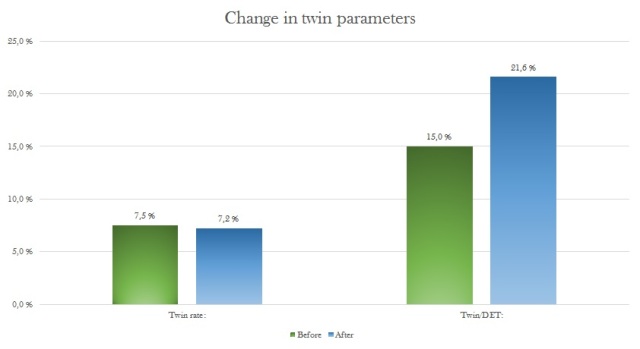 I am in no way arguing that we should abolish the twin rate as a parameter, it is a very important parameter for telling us about how a clinic is doing and how a country is doing. However, it does not tell us about the patient that does get a DET, and that is what twins/DET aims to tell us. And as always, what this requires is good raw data and access to that data.

This entry was posted in IVF and tagged Parameter, Patient centered. Bookmark the permalink.